Giorgio Garofalo is one of those authors whose passion and storytelling skills propelled them to great heights and popularity. Recently his book ‘Korian: Ark of the Fallen King’ hit the bestseller list becoming a breakout favorite for readers and reviewers.

‘Korian: Ark of the Fallen King’ is part of the The Korian Epic Fantasy Adventure Series, which offers readers a fascinating adventure taking place in a world that is captivating, bold and dynamic. In this book, which is the second book in the series, readers are drawn into a dystopian world loaded with mystical beings, sorcery, and combat, as well as passion, friendship, and survival.

For seven years, a remote island has served as a bucolic sanctuary, but a strange light in the southern sky summons more than curiosity. With a handful of his friends, and with help from a surprising face from the past, Korian – the Azura and bearer of the enchanted spear – returns to resume the brutal battle against the evil Aaron Hades and his army of Stragoy.

In this unique tale where a creature the size of a mall island pays it forward, a mysterious eye holds the key to buried secrets, and a heroic battle amid ancient ruins determines more than the future, the origin of the insatiable evil that pervades Endura is horrifically revealed. Follow Korian as he learns why the secret within the Ark of the Fallen King threatens the foundation of all Endurian life.

‘Korian: Ark of the Fallen King’ is a book that will have you craving more – yes it is that good., so much so we are grateful Garofalo is working on the third book of the series. Recently he took some time out of his busy schedule to talk to me about his success, the fantastic world he has created in his books, and what he is listening to while he is writing.

Your book ‘Korian: Ark of the Fallen King’ recently became a bestseller what was that like on a personal and professional level? How did you celebrate when you heard the news?

When I first became aware that Ark of the Fallen King became a bestseller, I had to exit the Amazon site and jump back in several times just to be sure. A bunch of emotions surfaced at the same time. There was an overwhelming feeling of gratitude to those who have given Korian a chance. I felt a huge sense of achievement. I remember thinking, ‘My wife and kids are going to take me serious now. They may even be happy for me.’ Just kidding. They’re elated. I’m so encouraged and blessed that my story has touched people, and I’m very excited that the book is getting some traction. On a professional level, achieving bestseller status gives an indie author a certain level of credibility. I hope to leverage this experience for greater exposure and hope to pour the many lessons learned into my next book.

To celebrate, I grabbed a cigar that I had put aside should this day ever arrive—a Cohiba Maduro 5 Genios—and paired it with my favorite scotch. There was a full moon that night, and I remember thinking that from this day forward, every time I see a full moon I’m going to think of the time I learned the news that Ark of the Fallen King had become a best seller.

Writing a series is very different than writing a stand-alone book. What made you want to write the Korian Epic Fantasy Adventure Series, and what was this process like for you?

I wanted to tell a story, not rushed and not to just churn out books, but to pour a piece of myself and my beliefs about being human into a fantasy adventure. I felt that a series is what it would take to adequately relate the themes I wanted to exploit. In the back of my mind, was George R. R. Martin’s answer to a question he was asked in an interview once of why he did not want his books converted into a movie, choosing instead to do a series. He did not feel the volume of his work could be adequately portrayed in a two-hour movie. Similarly, I did not want to rush the story. It had to unravel on its own pace. I found I had to fight the urge sometimes to rush to get to certain outcomes. I forced myself to focus on showing, not telling, and as a result, I’ve learned discipline and another level of patience I didn’t realize I had.

If you could spend some time with any of the characters in your series which one would it be and why? What would you all do on your one-day adventure?

I’d chose to spend some time with Oren, the three-foot tall, humanoid creature. I’d relish in his wisdom and in his stories. I figured he’d have a few to tell. After all, he’s lived more than two-thousand years.  I’ve always found it quite intriguing to speak with a person who is somewhat long in the years. In fact, I look for it and rather enjoy the exchange. Those moments are always fascinating and enlightening.

What would we do on our one-day adventure? I’d spend it in the valley of the Jayen—true giants of Endura—probably sitting on a ledge with Oren overlooking the goings on. I’d listen to his stories, while Korian and the gang would be brewing some magic potions under the guidance of, Zohar, the alchemist, to use as weapons. The colossal Jayen would gracefully stroll across the valley, tending to their entrapped beasts. Around us would be an awe-inspiring forest of thousands of spiraling pillars, striking monoliths, or towers of stone.

I’d ask Oren what lessons he’s learned and he’d be forthcoming. Who knows, maybe I’d include some of the things I’d learn from him in my next book.

Your books are epic reads which fascinate readers. What is it about the fantasy adventure genre that you find so intriguing?

Besides being a fan of both the horror and fantasy genres for as long as I can remember, I’ve always been intrigued by the way they give the storyteller the freedom to present themes in unconventional ways. I wrote a blog called “Writing Roots and Influencers – Why Dark Fantasy,” on my website, www.giorgiogarofalo.com where I describe my fascination with these genres in great detail. I reference two stories that I believe were integral in my journey. Interestingly, one was science fiction and the other, a little horror and science fiction combined.

The first was Mary Shelly’s, Frankenstein and the Modern Prometheus, and the second was The Streets of Askelon, by Harry Harisson, a short story released in 1962, also published under the title, Alien Agony. I used concepts from both these books in the Korian series.

When a book is so successful readers always want more. When will you be releasing a new book? Can you tell us about it?

I have started writing Book 3 and hope to be in a position to publish by summer 2023.  I’ll be introducing a new realm, a few new interesting characters, and I plan to bring back one surprising character from the past. There will be more epic battles, a few twists and I’m certain the ending will surprise you.  I’ll be sure to provide updates on my website of progress and for other exciting promotions. Stay tuned

I like all types of music but find that I change the tune, pardon the pun, based on the mood. When chilling I really like contemporary jazz that’s a mixture of smooth, groove, well-engineered, crisp and clear sounding that’s totally cool! Most of it is instrumental. Some describe it as a sophisticated oasis of sound. My go to has, and will always be rock and roll. After all, we always seem to have a certain affinity to music we grew up to, and rock is home for me.

When writing, I throw on headphones and play music that I think will inspire the mood or setting. I often put soundtracks to movies on. They inspire more than you realize. Two of my favorites are the soundtracks to ‘The Last of the Mohicans,’ and, of course, “The Lord of the Rings.”

You can find more about Giorgio Garofalo and his work on Amazon. 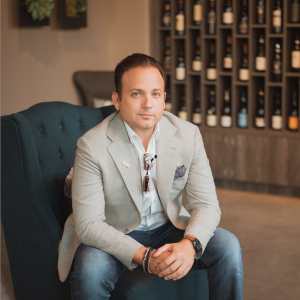 A leader in the worlds of finance, publishing, marketing, and brand management, Michael Alexander Beas spent more than 12 years in Fortune 500 companies before becoming an entrepreneur. Today, he is the co-founder of Altas Elite, the founder and CEO of eBook Marketing Solutions, and the CEO of the leading dance music magazine Raver. ​ An expert in book marketing, Michael has personally rebranded more than 1,000 books and made them bestsellers. He has written and published over 7,000 articles and has personally conducted interviews with some of the biggest names in dance music. Michael is passionate about disrupting his industry--and helping writers and music producers do the same. His extensive background in coding and SEO helps his clients breakthrough the digital landscape. Prior to founding his own businesses, Michael worked in revenue-generation for leaders in the banking, telecommunications, and commercial business insurance industries, including Citibank Financial, Lucent Technology, AVAYA Communications, and Liberty Mutual. Michael holds degrees in Business Administration, Business Management and Marketing from Nova Southeastern University. The author of two books, he is a dedicated reader and publisher, with many more books on the way.
Read all Posts

Getting Real With Dr. Dain Heer About His bestselling Book ‘Body Whispering’

Getting the Inside Scoop with Helena P. Schrader about her Groundbreaking Book ‘Where Eagles Never Flew: A Battle of Britain Novel’

Do You Need a Big Budget to Produce a Movie? In Conversation with Film Producer and Entrepreneur, Dar Dowling

Chatting with Bart Jackson about ‘CEO of Yourself’.